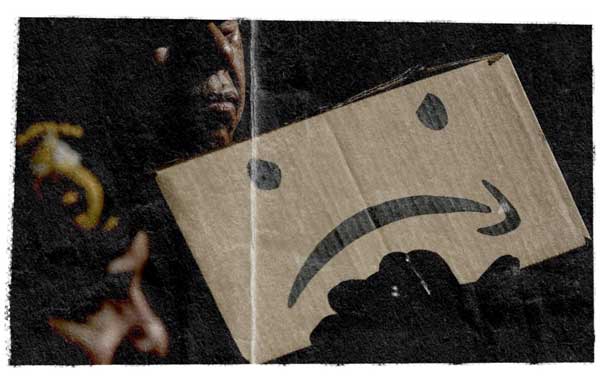 And there’s never been a better occasion to cancel your Prime membership and boycott Amazon and all its subsidiaries (which include AbeBooks, Amazon Studios, Audible, Book Depository, ComiXology, Goodreads, IMDb, Twitch, Whole Foods, Zappos, and dozens more).

As you can tell from the list above, Amazon owns a huge number of companies whose products and services millions use every single day.

. . . whether they’re walking to work in their Zappos shoes with an Audible audiobook in their ears, or watching streams on Twitch while scarfing down premium Whole Foods goodies, or binging Amazon Studios–produced TV shows while looking up the name of “that guy who looks like that other guy” on IMDb. And that’s true even when you leave Amazon itself out of the tally.

The point, in short, is not just that megacorporations are taking over the world, but that one monolithic corporation named Amazon controls an ever-increasing share of our mental environment.

Amazon’s dominance is funded by an illegal price-rigging racket that disguises the costs of its “free shipping” promise to Prime members. As a result, it has oodles of capital to spend on ventures well beyond its e-commerce perview. (Remember when all it sold was books?)

Today, Amazon has its finger in cloud computing, streaming, electronics, home security, A.I., surveillance — and yes, even the defense industry. (Oh, and did I mention that it’s now a bank, too?) As one of the ten biggest corporations on the planet, it’s power to influence you is therefore enormous. It’s meddling in areas of your life you’re not even aware of.

With all this, what are the chances that Amazon has your best interest at heart? Ask yourself: Are you being empowered — or exploited?

Don’t be naive — after all, we’re talking about the same company that is set on hanging workers out to dry, chucking the environment in the bin, forcing you to foot its tax bill, and distorting democracy itself. And it’s no friend of whistleblowers, either.

It doesn’t have to be this way. Amazon’s fate lies in one person’s hands . . . one person with the power to make or break the gargantuan tech tyrant, by either shopping from it — or dropping it altogether.

And that person is you.

We’ve long called for unswooshing the swoosh. This Prime Day, ditch your membership and boycott the mother of all tech-corp crooks (and every one of her brats).

It’s time to #unprime Prime — not just for one day, but for good.