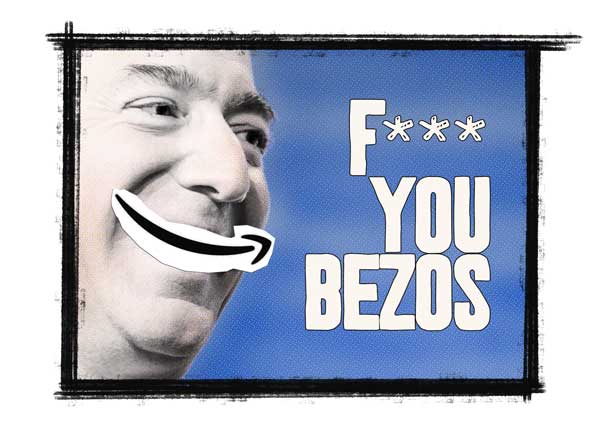 Jeff’s no longer the richest person on Earth: he recently had to settle for a paltry second-place position behind French silver-spooner Bernard Arnault. Nonetheless, he’s living larger, and more obscenely, than ever.

Take his new yacht. No, not his $500-million, 400-foot-long superyacht. I’m talking about Bezos’s second, sidecar-like “support” yacht — the sole purpose of which is to provide a landing pad for his helicopter while out at sea. As CNN put it, “Jeff Bezos' superyacht is so big it needs its own yacht.”

If that isn’t nauseating excess, I don’t know what is.

But this is about more than envy, resentment, or bitterness. The problem is the fact that centibillionaires (yes, that’s a word) not only exist at all, but that they and their monopolistic megabusinesses are routinely given a pass despite eroding workers’ rights, exacerbating climate change, and distorting democracy.

In the words of Stacy Mitchell, anti-monopoly activist, “the fear that I have is that we're losing democracy. That the Congress is effectively run by corporations. That Amazon” — and, by extension, Bezos — “has a lot more power than the rest of us do combined, in shaping the future of the country.”

Are we really willing to accept all that in the name of same-day delivery?

Don’t be fooled: Biden’s got the backs of the rich, not yours. It's up to us, the Third Force, to stand up to the tyranny of the billionaire class and all the backwardness it represents. We have to rise up, take power away from the rich, and share it among the people.

Check out the intro to our forthcoming book to find out how!