Trump is infected . . . with xenophobia

Trump is infected . . . with xenophobia 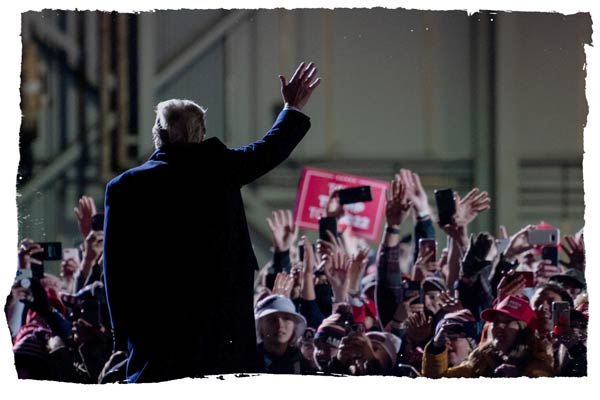 Just before it was revealed that he (and many other Republicans) had been infected with coronavirus, President Trump announced that he aims to limit the number of refugees allowed into the United States next year to just 15,000. That's down from 18,000 last year — and far below the 110,000 that his predecessor approved for entry in 2016.

Fanning the flames of another lethal infection — xenophobia — the president paired the announcement with a race-baiting tirade against Rep. Ilhan Omar at a rally in her home-state of Minnesota. At the rally, days after attending the elbow-rubbing event at which an actual (rather than fabricated) threat to life was likely spread among several high-ranking Republicans, the president attempted to spread fear of immigrants "from the most dangerous places in the world." In addition, Trump claimed that his Democratic opponent "will turn Minnesota into a refugee camp" if he, Joseph Biden, wins the election.

Trump's misinformation-riddled remarks came only a day after he failed to denounce white supremacists during the first presidential debate, echoing prior inflammatory comments on the subject of the Unite the Right rally in 2017. A group that the president was asked to denounce during the debate, the so-called Proud Boys, celebrated what they saw as a tacit acknowledgement of his support. Questioned by reporters, the president pleaded ignorance, claiming "I don’t know who the Proud Boys are." Only when pressed the following day to clarify his views, in an interview with Fox News' Sean Hannity, did Trump finally say, "I condemn the Proud Boys."

Together with his punitive policies and his habit of iterating xenophobic canards, the president's reluctance to distance himself from far-right and racist ideologues all but wipes out the United States' reputation as the land of tolerance and opportunity — a safe-haven for the persecuted. In famed Republican president Ronald Reagan's words, "America's tradition" is "as a land that welcomes peoples from other countries," with a "responsibility of welcoming and resettling those who flee oppression." But the current president is too craven to uphold that tradition. Having neglected to prevent the worst pandemic in a century from ravaging his country, Trump is stooping to cowardly fear-mongering — and destroying what remains of the United State's reputation in the process.