From hate-mail to hashtags

From hate-mail to hashtags 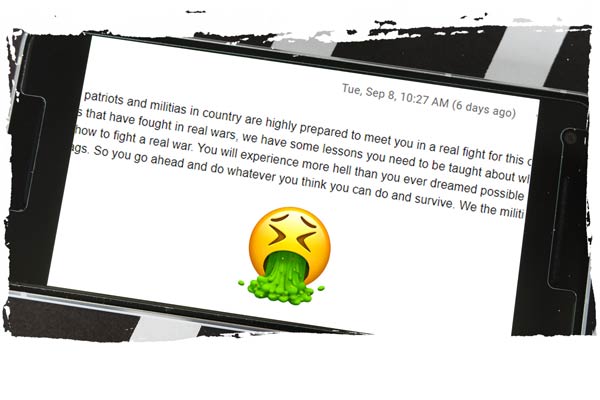 Here's an excerpt from hate-mail we received on September 8th:

‍
You think everyone in America is afraid of you. Trust me before this bullshit you have started is finished you will be afraid of us. We will not be shooting teargas or rubber bullets at you. It will be for real bullets.
‍

That's only one of hundreds of similar messages which have made their way into our inbox since we began our campaign for the White House Siege. We've been asked to "go to another country." We've been informed that we'll be met by "armed militias." We've been told to "get ready for war." We've been threatened with being "taken away in body bags." We've been called disappointingly few variations on "commie" and "libtard." We've been bad-mouthed by "patriots" whose mastery of grammar would make George Washington wince. We've been called the N-word.

From the beginning, we've made it clear that we're calling for an explicitly peaceful demonstration. But that has been wholly lost on bloodthirsty, far-right keyboard-warriors. Honesty and truth are meaningless to them. They're spoiling for a fight.As a result, the hashtag #WhiteHouseSiege has been censored on Facebook and is not likely to survive for long on other social-media platforms. So, from now on, we will tag our WHS-related posts with the hashtag #ReOccupy.
Stay safe.