Piece from The Pulse Newsfeed 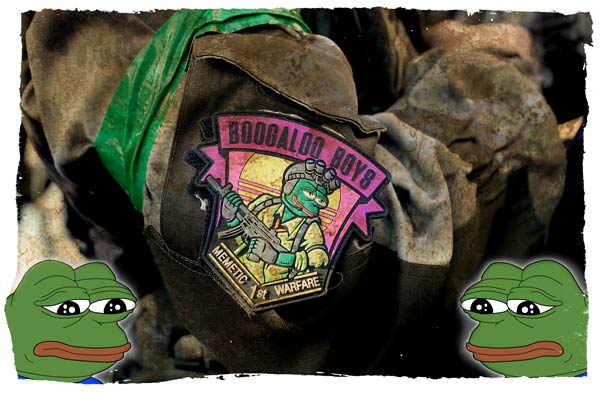 Earlier this year, the FBI elevated a new threat to its list of top-level priorities, alongside ISIS: racist violence. Though the KKK, neo-Nazi gangs, and other hate-groups are mainstays of the American right's extremist fringe, a new affiliation — born online and steeped in meme culture — has come to light as anti-lockdown and racial-justice protests have faced right-wing backlash.

Decked out in military fatigues, tactical gear and — signally — Hawaiian shirts, gun-toting "boogaloo bois" have maintained a conspicuous presence at demonstrations this summer. (Kitschy Hawaiian patterns, as well as igloo motifs, symbolize "big luau" and "big igloo," corruptions of boogaloo coined to evade internet censors.) More an in-group revolving around memey signifiers than a movement, the boogaloo bois are a loose band of pro-gun, anti-government militants, largely mustering on Facebook and subsribing to various strains of far-right libertarianism.

They are united, however, by their aim to spark a government-dissolving revolutionary war known as the "boogaloo." (The word is borrowed from the 1984 breakdance-themed flop Breakin’ 2: Electric Boogaloo, and is meant to evoke the notion of a "sequel" to the Civil War.) And though not all adherents embrace a racist ideology (some even expressing solidarity with black victims of "state" violence), to many the sought-after boogaloo is an all-out "accelerationist" race war. That idea has been appropriated by white supremacists and neo-Nazis. And as unrest erupted across the country in the wake of George Floyd's death, they saw an ideal opportunity to catalyze the boogaloo.

Online radicalization is no longer exclusive to ISIS. In the United States, homegrown memes now inspire an all-American brand of terrorism.