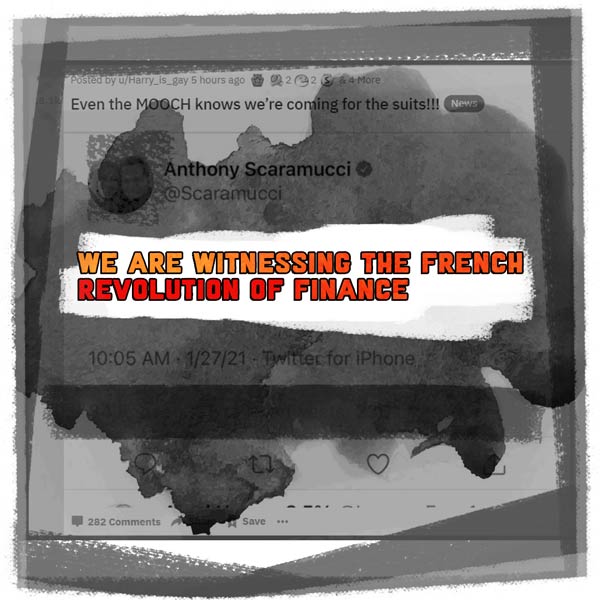 Whether incensed or inspired by Wall Street's misdeeds, the memers of r/WallStreetBets are taking up the Occupy torch. Out of righteous malice, posters to the irreverent investment forum sent the share-price of GameStop — the video-game retail chain — soaring this month in an incendiary bid to burn hedge funds short-selling the company's stock. One such fund, Melvin Capital, sustained losses so severe — on the order of 30 per cent — that other funds bailed it out to the tune of nearly $3 billion.

In other words, average Joes on Reddit are aiming to pull short squeezes to kill off hedge funds, one by one — scoring big profits in the process. Yesterday, for example, one redditor posted a screenshot of his portfolio which purported to show that he had turned 50 grand into over $22 million by taking an aggressive long position on GameStop. Others similarly playing the market claimed to have gained the ability to afford life-saving vet bills and pay off student debts. That's one wild way to redistribute wealth from the 1% to the 99%.

Stuck at home, strapped for cash, and short on tolerance for profit-raking fat cats, everyday investors are taking big risks — that is, gambling — to stick it to Wall Street with a little taste of its own medicine. ("This is unnatural, insane, and dangerous," said Michael Burry — played by an unhinged Christian Bale in The Big Short.) It's all part of a rabble-rousing game of poke-the-bear — at least, for as long as it lasts. Meantime, as Wall Street sweats through its suit, let the people look on and laugh.