Its Sculptor Has Died, But "Charging Bull" Lives On

Its Sculptor Has Died, But "Charging Bull" Lives On 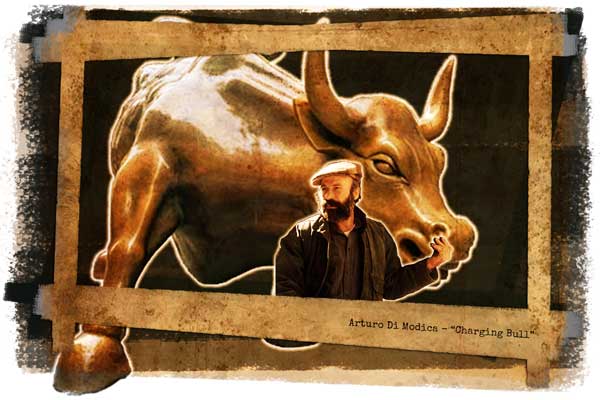 His world-famous monument to economic optimism has remained "perpetually poised to charge through the Financial District" since 1989, two years after Black Monday saw the violent crash of stock markets worldwide. And though widely treated as a symbol of capitalist recklessness — as in our notorious bull-and-ballerina poster for Occupy Wall Street — the piece's origins are more mischievous than one might assume.

Originally deposited in front of the New York Stock Exchange as a "gift" to his adoptive homeland, the massive statue — hand-made and self-financed by the once-poor, Sicilian-born artist — was swiftly removed: Di Modica didn't have permission to put it there. Charged a fine of $500, the sculptor afterwards agreed to have it moved to its current location, where it has stayed in suspended animation ever since.

As it turns out, Di Modica's bullish feeling regarding American capitalism was not only premature but misguided. Only 20-odd years after Black Monday — the sorry day that allegedly inspired Charging Bull's creation — the world economy was thrown once more into a crippling financial crisis. And some dozen years after that, stock markets crashed again in the midst of the recession brought on during the COVID-19 pandemic. One begins to wonder whether this sort of thing isn't to be expected of a precarious system built to benefit the few on the backs of the many.

Though Di Modica has left us, his most famous artwork lives on — a brazen idol to be honored and worshiped amid the modern world's financial Babylon. Mammon couldn't be more pleased.