In Hong Kong, Beijing Asserts Its "Might Is Right"

In Hong Kong, Beijing Asserts Its "Might Is Right" 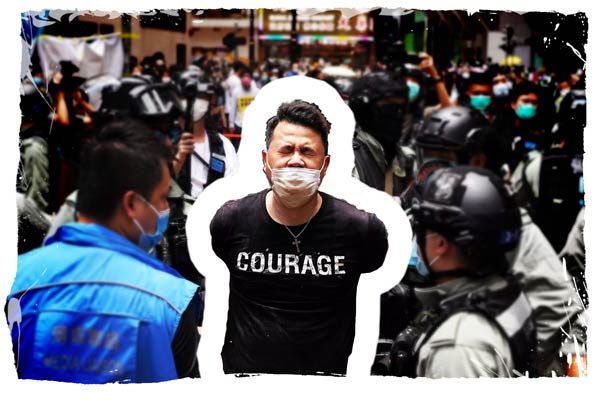 The law of the Mainland is coming down hard on long-suffering Hong Kong. In July, teenage pro-independence activist Tony Chung became the first political figure arrested for violating the Beijing-imposed national-security law. Police reportedly surrounded Chung in a shopping mall, then “pulled him into a stairwell and pinned his head in front of his phone — an attempt to trigger the facial recognition system.” The 19-year-old remembers the officers’ asking him, “Do you know with the national security law, we have all the rights to unlock your phones and get your passwords?”

Harsh law-enforcement tactics such as these are becoming more widespread in the wake of the national-security law’s passage this summer. And they smack of the invasive, dissent-crushing methods employed in Mainland China. Tony Chung himself was accused of an offence that is common in the Mainland but (until recently) unknown in Hong Kong: internet-based thoughtcrime. He was arrested on suspicion of having called for Hong Kong’s independence — now illegal — on Facebook, which he denies.

Though released on bail, Chung may yet be subject to further intimidation-tactics — tactics similar to those that other Hong-Kong activists have faced. Weeks before her arrest, Agnes Chow reportedly noticed cameras near her doorstep, apparently “a common trick of the secret police” in the Chinese mainland. And in August, more than 200 police stormed the offices of the pro-democracy newspaper Apple Daily, seizing droves of materials in connection with the arrest of its owner, Jimmy Lai, on suspicion of “collusion with foreign powers.” (Among those arrested along with Lai were several newspaper-affiliated executives and Lai’s two sons.) Long a thorn in the CCP’s side, Lai — who is a British national — had earlier faced accusations of “subversion” for comments he had made on Twitter. “I have always thought I might one day be sent to jail for my publications or for my calls for democracy in Hong Kong,” he wrote, presciently, in May. “But for a few tweets, and because they are said to threaten the national security of mighty China? That’s a new one, even for me.”

“Might is right” regimes — like Xi’s in China, Assad’s in Syria, Lukashenko’s in Belarus, el-Sisi’s in Egypt, and Netanyahu’s in Palestine — must be held responsible for their atrocities. If the United Nations and our current crop of world leaders are not up to the job, then we the people, with the most revolutionary tool ever invented in the palms of our hands, must become a geopolitical “Third Force” and dispense radical justice from below.