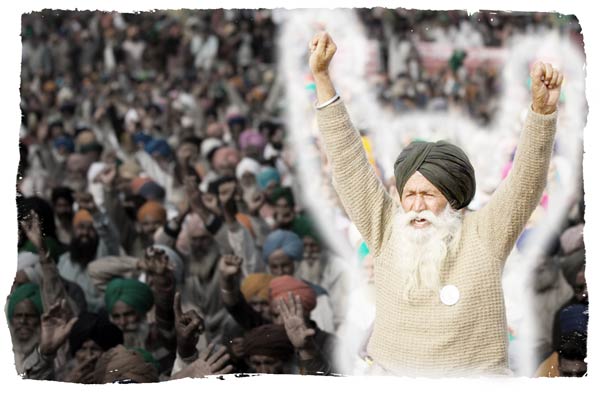 November 25th marked the largest protest in human history — over ten times the size of demonstrations that erupted in the wake of George Floyd's murder at the hands of police.

During a 24-hour general strike across India, more than 250 million marched in solidarity with the country's long-suffering farmers. "Colonial-induced famines . . . oppressive government policy, exploitation by feudal-minded landholders, and, of course, climate change have continually left India’s land workers among the worst off the world over," writes Nitish Pahwa for Slate. Not to mention the apocalyptic swarms of locusts that ravaged crops this summer.

That was the situation well before a pandemic of suicidal despair overtook those whose livelihoods were decimated during lockdown — and before Prime Minister Narendra Modi instituted exploitative new policies designed to undermine farmers and prop up huge corporations.

When thousands upon thousands marched on Delhi, they faced tear gas and water canons as police attempted to quash peaceful demonstrations with brutality. And despite ongoing arrests and crackdowns, demonstrating farmers from across the vast nation have dug in within the capital. Modi has made half-hearted efforts to negotiate, but demonstrators demand nothing less than that the new laws be struck down. Can protestors break the stalemate? They may not have time on their side, but they have the numbers. If Modi's government doesn't concede, it may have a rebellion of millions on its hands.

As the warming climate, the coronavirus pandemic, the erosion of political stability, and other crises threaten the old world order, will other states follow suit . . . one toppling after another around the world? Without immediate revolutionary change, India's current predicament could be a snapshot of the global future in the perilous times to come.