The world cannot be fixed with the same thinking that broke it. 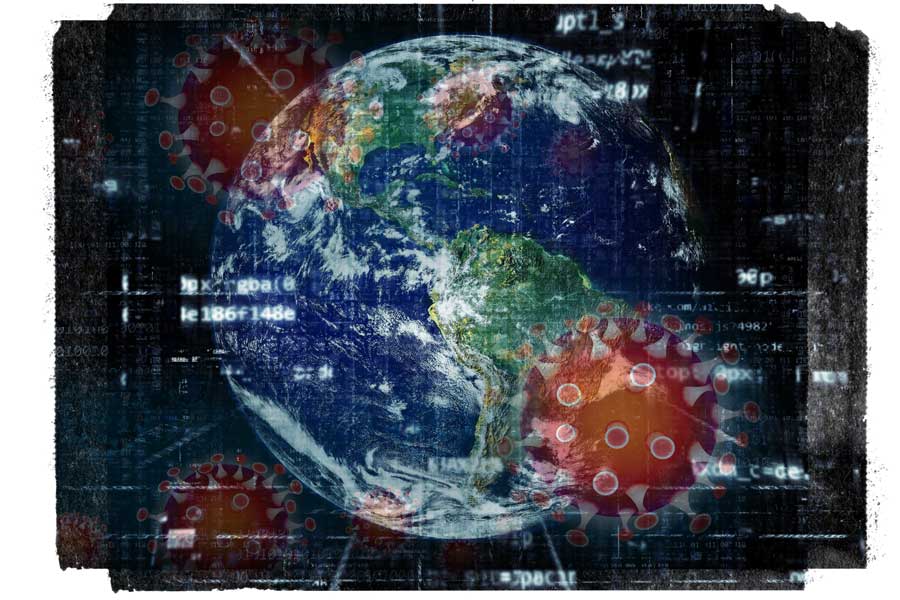 It struck as if from on high, like a bolt of lightning. After striking an insulating material such as lawn or earth or flesh, lightning often leaves behind scorch-marks in branch-like patterns, which trace its path through the stricken material as the latter undergoes electric breakdown. Likewise, as the coronavirus contagion has surged through its human medium, it has left behind a pattern of destruction laying bare the structural failings of the world as we knew it before the shock of the pandemic.

The scale of the crisis is historic. Last Friday, President Trump signed into law a plan for the relief of the American economy: a stimulus package totalling $2.2 trillion, the largest relief package in the country’s history. (For comparison, the package wrought under President Obama in 2009, to alleviate the toll of the Great Recession, came to a mere $831 billion.) And yet the provision of urgently needed medical supplies, such as masks and test-kits and ventilators, remains woefully — mortally — beyond the United States’ reach. It is a country mighty enough to summon two trillion dollars to stave off the demise of its economy (and, owing to its central predominance, that of the rest of the globe), but unwilling to do much of anything to save the lives of its citizens.

This is a matter not just of the current president’s especial callousness, nor of his unfortunate intellectual shortcomings. It is a symptom of the country’s diseased moral makeup, at least as manifested among the powerful. No more hospital beds will be procured until they prove able to turn a profit; no factories will be converted to the manufacture of ventilators unless doing so becomes gainful. In times of crisis, only warfare has provoked the political will necessary to override the supremacy of American wealth, thereby harnessing the economy to serve the immediate interests of the nation, rather than solely its elite. If the imminent deaths of tens of thousands of are not enough to motivate the same today, then there is little else that will. To leave the burden of choice — to earn, or to aid — up to the charity of private individuals is grossly negligent, if not criminal. It remains to be seen just how charitable they will prove to be.

Meanwhile, as nearly every nation on Earth wrestles with the costs of the pandemic (which doubtless will endure in the form of enormous debts, not to mention the loss of many lives and even more livelihoods), other existential dangers loom. In January, the Bulletin of the Atomic Scientists moved the Doomsday Clock closer to midnight — one hundred seconds away — than at any time since its establishment in 1947. Today’s nuclear powers are plunging headlong into not just a renewal but an acceleration of the Cold War’s race towards annihilation. Furthermore, though the worsening of the climate crisis has been temporarily allayed by the virus’ precipitating a plummet in fossil-fuel consumption, it will resume with a vengeance once everyone — that is, everyone who still has a job — returns to work. Whether the coronavirus can soon be controlled, larger disasters await.

As this perilous situation has thrown into stark relief, “business as usual” is sorely inadequate to the solving of threats the likes of which all of humanity must face as one. Indeed, this state of affairs has not only abetted the pandemic; it lay at the very root of it. Densely intermeshed, global supply chains, transporting goods and people all across the surface of the Earth, ensured that any novel and highly contagious disease, once introduced into this network, would rapidly become widespread without improbably proactive intervention on the part of the world’s leadership. What is more, the post-2008 financial paradigm left the global economy critically vulnerable to further and greater destabilization. Meantime, the strained political mood, both within and between the world’s most powerful states, inspires little confidence in the prospect of a worldwide united front in the face of worldwide problems.

Morale is in short supply, while fear risks metastasizing into a pandemic of its own. The cracks are showing, and yesterday’s approach can only fail to stop their spread. The world cannot be fixed with the same thinking that broke it. The rotten nature of the financialized global economy must be addressed. The vital necessity of healthcare, for all of society, must be recognized. The unchecked political and economic orthodoxies that brought humanity to such a state of peril must be overturned. All habits and assumptions must be reconsidered. Sweeping, systemic change must go viral; all else points to darkness.